This project focused on researching the distribution of sexually transmitted diseases in Omaha, specifically chlamydia and gonorrhea, by primarily focusing on location. Throughout the research, the project revealed that income, age, and race played a factor in the distribution of STDs as well.  We decided to research and analyze data on this topic because Omaha is number one in chlamydia rates in the U.S. and roughly twice the national average in STD rates. Due to these exceptionally high STD rates in Omaha, we believe it is important to be aware of the factors that play a role in the distribution of these diseases, as well as ways to stay safe and engage in preventive health care.

For the purpose of this project, various graphs, maps, pamphlets, and other advertisements such as billboards were collected and analyzed to evaluate the factors that play a role in STD distribution and prevention promotion throughout North and West Omaha. The graphs obtained from the Douglas County Health Department website represented STD distribution in Omaha per zip code, race/ethnicity, and age. The maps used to represent wealth distribution in North and West Omaha were collected from the City-Data website. Maps collected from the GetCheckedOmaha website represented locations throughout North and West Omaha that offered free condoms, as well as locations that offered free STD testing. Pictures of billboards that are displayed throughout North Omaha were also obtained from the GetCheckedOmaha website. Group members also traveled to the Douglas County Health Department to collect various pamphlets with basic STD prevention and treatment information. All of this data was then coded into different themes for organization and evaluation purposes. The four main themes that seemed to play a major role in the STD distribution and prevention promotion throughout Omaha are location, wealth distribution, age, and race/ethnicity.

The main focus of this project was location, and how it plays a role in the distribution of STDs and prevention promotion throughout Omaha. More specifically, the project was focused on comparing North Omaha, and West Omaha. To look into the distribution of prevention promotion throughout North and West Omaha, maps representing locations that offered free condoms and STD testing from GetCheckOmaha.com were collected and analyzed. The map that displayed the areas throughout Omaha that offered free condoms revealed that there were up to 30 available locations in North Omaha, and none in West Omaha. The map representing free STD testing locations revealed that North Omaha, again, had up to 30 available locations, while West Omaha had none.

Graphs from the Douglas County health department that represented STD distribution per zip code were also analyzed to look into which areas of Omaha have the highest rates, still focusing on North and West Omaha. The analysis of these graphs revealed that zips codes in the North side had much higher rates compared to the West side of Omaha. More specifically, zip codes in North Omaha, such as 68152, 68110, and 68111, had 3,000 or greater rates per 100,000 people. And, in zip codes in West Omaha, such as 68069 and 68130, had only less than 1,000 rates per 100,000 people. From this research, a conclusion was reached that there is a clear and extensive disparity between STD distribution among North Omaha residents and West Omaha residents. Also, we concluded that there is far more prevention promotion, such as free condoms and STD testing clinics, available in North Omaha than West Omaha, which was expected, due to the exceptionally higher STD rates in North Omaha.

During the process of conducting research, the data on STD distribution in Omaha per zip code that was analyzed revealed that income, or wealth distribution, also played a role in how STDs are distributed among different locations throughout Omaha, specifically North and West Omaha. To figure how income affected STD distribution in Omaha, graphs from the Douglas County Health Department website that displayed STD rates per zip code were analyzed. Data from the City-Data website was then collected to compare average median household incomes per zip code. Upon this analysis, the research revealed that the median incomes in North Omaha, which had much higher STD rates than West Omaha, were substantially lower than those living in West Omaha. More specifically, households in zip codes in North Omaha, such as 68110 and 68111, had an average median income of only $24k, while households in zip codes in West Omaha areas, such as 68130 or 68118, had an average median income of $97k-$118k.

Upon this analysis, a conclusion was reached that income clearly plays a large role in the distribution of STDS in Omaha, as the data shows, there is an extensive disparity among STD rates when looking at location and income. Those with lower incomes on the North side had much higher STD rates compared to those on the West side, whom had much higher incomes and much lower STD rates. Another conclusion that was reached is that perhaps having a lower income affects one’s ability to have access to adequate and affordable health care to prevent or treat their STDs, thus, those living with lower incomes are more at risk to contracting these diseases.

During the process of gathering research, data pertaining to age was obtained to look into how it plays a role in the distribution of STDs in North and West Omaha. The data collected revealed that age indeed does play a significant role in STD distribution in Omaha. Graphs representing STD distribution per age were collected from the Douglas County Health Department for the purpose of this section of the research. The age groups in the graphs are: 0-9, 10-14, 15-19, 20-24, 25-29, 30-34, 35-44 and  >44.

Upon analysis of this data, a conclusion was reached that adolescents and young adults are clearly more at risk to contracting STDs than older adults are, considering that nearly half of all new infections occur among 15-24 year olds. Also, the data shows a direct correlation between age, location, and income when looking at STD distribution. Thinking back to the wealth distribution section, the data shows that adolescents and young adults, ages 15-24, who live on the North side of Omaha, and whom also have much lower average median incomes, account for the highest STD rates in Omaha.

With this information, the STD rates for each racial group were then connected to see the role that race played in STD distribution in Omaha.  In each of these locations, a graph was found that showed the rates of chlamydia infections per 100,000 people. In North Omaha, the location with the greater population of black people, there were 3,000 or greater chlamydia cases. In West Omaha, the location with a higher population of white people, it was discovered that there were 1,000 to 2,000 chlamydia cases. As one can see through the conducted research, the factor of race is substantially interconnected with location, age, and income, which is what the scholarly articles often stated would happen.

As STDs disproportionately affect minority populations, adolescents, and those who come from lower income households in Omaha, NE, there is a similar trend for STD distribution on a national comparison as well. Upon the comparison of STD rates in Omaha per zip code, the data revealed that predominately white populations lived on the West side of Omaha, whom had relatively high median incomes of up to $120k, and relatively low STD rates of less than 1,000 cases per year, while black populations predominantly lived on the North side of Omaha, whom had much lower median incomes of as low as $20k, and much higher STD rates of up to 3,000 cases per years. On a national level, scholarly journals revealed that race, age, and wealth distribution has a prominent effect on STD distribution as well. The journals illustrated a common trend in STD distribution per age, location, income, and race; the minority populations all condense into one area, whom have exceptionally low average median incomes, and whom also have much higher STD rates than those who do not identify as a minority and live in well off neighborhoods with relatively high incomes. Data also revealed that adolescents, ranging from the ages of 15-19, and 20-24 had much higher rates than those over the age of 25 years. African American populations tend to population much of the South, largely separated from white populations. The African American populations in the South also revealed a correlation between average median income and STD rates. As expected, those who reported having low average median incomes also reported having much higher STD rates than their counterparts whom live in wealthy neighborhoods with high average median incomes. While belonging to a minority population or having a low income should not determine one’s access to available health care for either prevention or treatment services, this seems to be a common issue for at risk populations, contributing to the exceptionally high STD rates that these populations face.

Understanding STD risk factors per location/ income, and race/ethnicity is extremely important for tailoring public health care interventions. While as a group we did not determine any specific plan of action to take in order to reduce these disproportionately high STD rates among at risk populations, we have come to the conclusion that prevention promotion is the most important matter for preventing sexually transmitted diseases among these populations. Spreading the word about available locations that offer free condoms, STD testing, and STD treatment could be key to reducing the rates among at risk populations.  The more exposure to STD facts and prevention will educate people and in the long run hopefully lower the rates of STDs. Omaha is the #1 major U.S city in Chlamydia rates there needs to be efforts to bring these numbers down. To do this Omaha health organizations need to focus directly on the North side, where the main problem lies.

Some members of our group made a trip to the Douglas County Health Department, the health department educates the community on disease control and provides services for disease treatment but especially focuses on those who can’t afford it. At Douglas county we picked up 5 pamphlets that are educating people on STDs, facts, and prevention. These certain pamphlets appealed to minorities, the pictures of people on these pamphlets were mostly Latino and African American. The statistics from Douglas County show that African Americans in Omaha have the highest STD rates. GetCheckedOmaha was another important part of the research that was looked into. GetCheckedOmaha is an organization dedicated to decreasing STDs in Omaha. Their website provides a list of places that the public can go and get checked and treated. The graph shows that North Omaha has 18 places while West only has 6. GetCheckedOmaha places free condoms in many different spots in town, we even found them in tattoo parlors and music shops. BirdsandBees billboards were also found on the North side of Omaha.

Jemmott III, John B., et al. “Effectiveness Of An HIV/STD Risk-Reduction Intervention For

Adolescents When Implemented By Community-Based Organizations: A Cluster 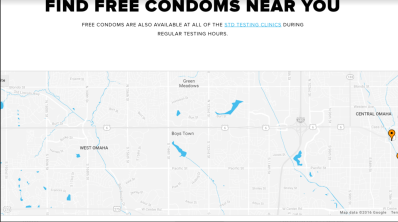 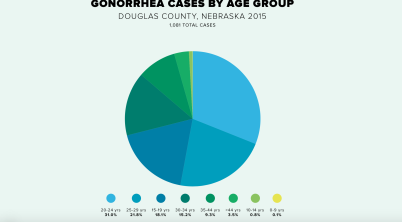 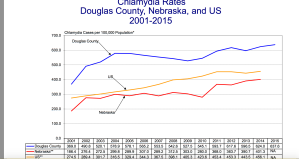 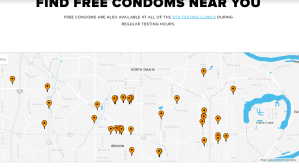 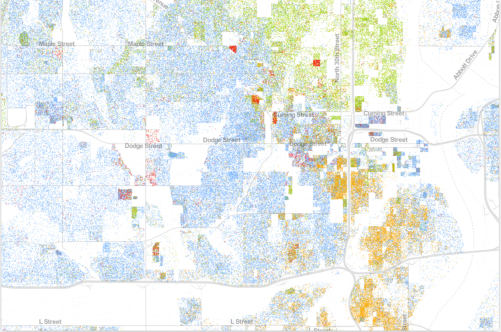 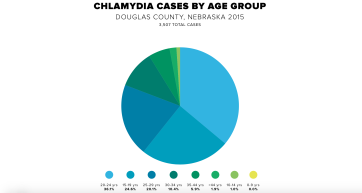